Having returned, after a terrible accident in 2014, to competitive windsurfing in the early months of 2015.

Camille showed from the very onset of the season his qualities had not diminished and he was back stronger and more determined than ever before. Winning the first event of the AWT tour in Cape Verde against Kauli Seadi in the final cemented the fact he was back.

Impressive wave riding and off the lip action, solidifies Camille’s qualities.
Later on the American Windsurf Tour Camille would go on the win the Peru event as well.

Camille also entered the PWA in 2015 with its often challenging European onshore conditions. First event of the year was scheduled for Gran Canaria (25th) followed string up with the second leg in Tenerife (9th). After a short recess on the PWA tour the riders would once again gather in Denmark which presented very challenging conditions with less wind than seen previous years which saw Camille finish in 17th. The next event in France was a no wind experience but shortly after follow by the Aloha Classic in Maui. Camille fought strongly and claimed some of the highest wave scores in the single elimination to finish in 4th. With several days on hold before the double elimination could be run, Camille end up facing local icon Levi Siver who would eventually push Camille from his fourth to a fixed fifth position for the event, 11th overall on the PWA tour for 2015. 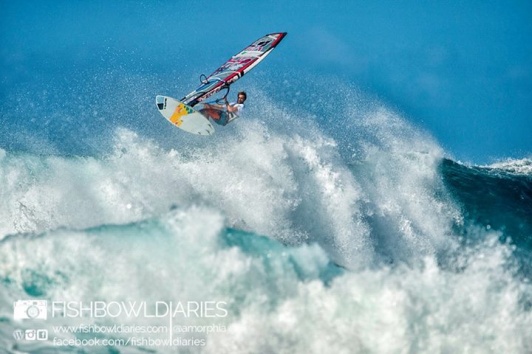 Big congrats to Camille for his solid sailing throughout the year and for the results which he has achieved!